For the next few weeks, we will be hosting authors from Bienvenue Press who will be sharing scenes from their books that highlight their settings. This week, Carrie Dalby stops by the Front Porch to share some of her southern gothic book, Murmurs of Evil. So, sit back, have a cup of coffee or tea, and enjoy!

On the Front Porch with Murmurs of Evil

Thank you for welcoming me back to the front porch for my third instalment. Murmurs of Evil is the second book in The Possession Chronicles. It furthers the drama surrounding the Melling family. Today, we’re heading to their weekend house near Montrose in 1906 as Magdalene Jones, the newly hired lady’s companion for Mrs. Melling, arrives. 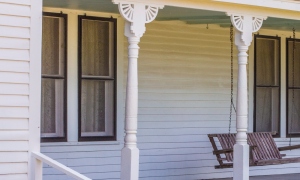 What Mr. Melling referred to as his cottage was nothing short of a manor to Magdalene. It might be smaller than his mansion in Mobile, but the looming spires atop the gables of the columned white house were beyond anything she thought possible in the wilds of the Eastern Shore. The only things higher than the peaks of the roof were a few towering southern pines amid the deciduous trees. The clearing around the house made for a tidy yard, offset with a scalloped sweep of white pickets as ornamental as the building’s gothic windows. But the little fence around the yard seemed incapable of holding back the weight of the forest. The house itself appeared powerful enough to stop any intrusion, natural or not. It possessed the grace of a cathedral, the charm of a country church, and the oppressive mystery of mortality all in one glance.

Magdalene’s apprehension sat heavy in her chest, but she put on a brave face when Captain Walker opened the gate. He led her around to the huge back porch and knocked on the screen door of the kitchen.

A tiny form approached them, her heart-shaped face cherubic and her gingham dress crisp as a picnic blanket. Behind the girl, a woman with an oval face the same dark hue as the child’s came to the door.

“Captain Walker, this will never do.” The woman wiped her hands on her apron and opened the door. “Give me her bag, but present her at the front.”

The open door showed the kitchen housed a modern stove, icebox, and sink with plumbing—all extravagant compared to Magdalene’s country home. She was pleased to see her trunk in the far corner, which had been collected from her aunt’s house two days before. At least she’d have her familiar things that night.

“You know I always wish to call on the most important lady of the house first.” The captain reached into his coat pocket and retrieved a candy stick. He held it out to the young girl. “My compliments to Miss Priscilla.”

Her face beamed as her hand clutched the treat. “Thank you, Captain Walker!”

He tipped his hat to her.

“You’re a scoundrel to give that to her before supper, but I’m not one to take it away from her now.” The cook’s words were harsh, but her dark eyes revealed tenderness for her daughter.

“Now, Miss Rosemary,” he said in response, “let me introduce you to Miss Magdalene Jones before I bring her ’round. Miss Jones, this here is Rosemary Watts, the best cook this side of the bay.”

“Hush with your compliments, Captain. Just get her to the front door before Mr. Melling accuses you of dilly dallying with your important load.”

Read more about how Magdalene settles in with the Mellings in Murmurs of Evil, the second book of The Possession Chronicles—a Southern Gothic family saga. And if you’re keeping track, Captain Walker is Joe Walker  from Fortitude, shared in my first post of this porch series.

Bio: Carrie Dalby, a California native, has lived in Mobile, Alabama, since 1996. She’s published several non-fiction articles in national and international magazines, served two terms as president of Mobile Writers Guild, worked as the Mobile area Local Liaison for SCBWI from 2012-2017, volunteers with Metro Mobile Literacy Council events whenever possible, and helps coordinate the annual Mobile Literary Festival. When Carrie’s not reading, writing, browsing bookstores/libraries, or homeschooling, she can often be found knitting or attending concerts. Find links to all her social media accounts and more on her contact page.

Want to be a guest blogger? Visit our webpage at: https://bienvenuepressblog.wordpress.com/

2 thoughts on “Murmurs of Evil by Carrie Dalby”