For the next few weeks, we will be hosting authors from Bienvenue Press who will be sharing scenes from their books that highlight their settings. This week, Carrie Dalby stops by the Front Porch to share some of her southern gothic book, Scarred Memories. So, sit back, have a cup of coffee or tea, and enjoy!

On the Front Porch with Scarred Memories

I’m back on the front porch today for my fifth instalment. Scarred Memories is the fourth book in The Possession Chronicles. For this one, we return to Mobile, Alabama, in 1910. On the Davenports’ front porch, we have three-year-old Phoebe and her babysitter, Darla Beauchamp of Dauphin Island, preparing for Halloween. Hopefully it will help cool you during the heat of summer. It is well shaded.

Phoebe sat at the top of the front porch steps, basket in her lap, while Naomi stood inside the open door to keep an eye on her.

“I’ve got Phoebe,” Darla told the cook. “You listen out for Lucy.”

Naomi nodded and pushed the door closed. Darla set to work sewing the decorated newspaper capes around the toys with blue yarn, and then made chin straps for the pointy hats while Phoebe watched in rapt attention.

“Now Doff,” the girl proclaimed as she pulled the last, slightly larger hat from her basket. “I catch him, you tie.”

Darla followed her to the door. “Your mother might be sleeping, so we have to be quiet.”

Phoebe put a finger to her lips before entering. She easily caught her cat on the sofa and Darla settled beside them.

“Don’t take this personal, Doff,” she said to the cat as she tied a ribbon under its chin to secure the wizard hat.

Phoebe giggled and, clutching the tabby to her chest, ran for the kitchen to show Naomi. 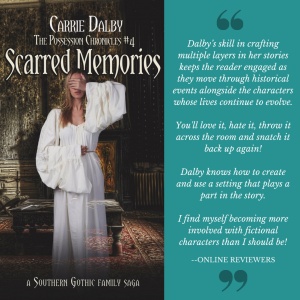 Find out more about the Davenport and Beauchamp families in Scarred Memories, the fourth book of The Possession Chronicles—a Southern Gothic family saga. And yes, the Lucy mentioned in the excerpt is the same Lucy from Perilous Confessions. 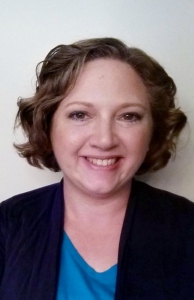 Bio: Carrie Dalby, a California native, has lived in Mobile, Alabama, since 1996. She’s published several non-fiction articles in national and international magazines, served two terms as president of Mobile Writers Guild, worked as the Mobile area Local Liaison for SCBWI from 2012-2017, volunteers with Metro Mobile Literacy Council events whenever possible, and helps coordinate the annual Mobile Literary Festival. When Carrie’s not reading, writing, browsing bookstores/libraries, or homeschooling, she can often be found knitting or attending concerts. Find links to all her social media accounts and more on her contact page.

Want to be a guest blogger? Visit our webpage at: https://bienvenuepressblog.wordpress.com/

One thought on “Scarred Memories by Carrie Dalby”

#TeaserTuesday
Check out our writing contest! Winner receives $50! Link is in our bio!
#MondayBlogs
#TeaserTuesday
#TeaserTuesday
Are you working on a #campnano project this year? Consider submitting to our Front Porch Blog! We'll share your post with our social media links and share yours as well. Please see our link in our bio!